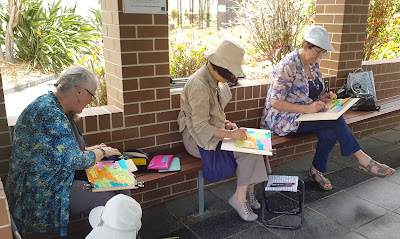 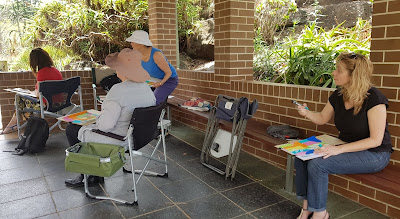 The November workshop explored the use of opaque pens over paint. "Paint first, draw later".

I thought the succulent area the most promising for varied subject matter, plus it had the covered area for shade. This approach is such a different one for many of the participants and a few commented that they were way out of their comfort zone.
Using a new medium and approach can be really challenging.
The results were quite remarkable. 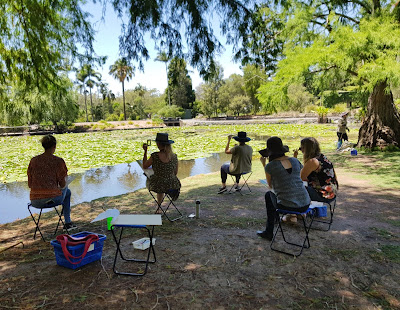 The final workshop of the year was a professional development session for the Education staff. We explored the use of Posca pens on a coloured ground and spent the morning observing the waterlilies.

I have still been spending every Thursday drawing on location, sometimes joined by fellow artist friends or Urban Sketchers. 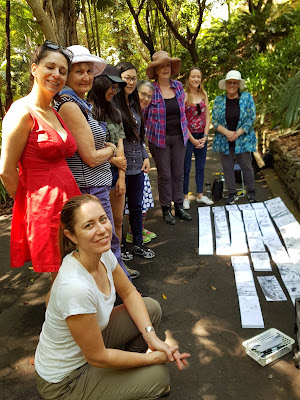 My October workshop in the Botanic Gardens was entitled "Nature Journaling with a Difference".

After discussing the nature of journaling and an approach incorporating close observation and sensitive mark-making, each participant was given a concertina sketchbook and various ink pens to record their observations and sense responses.

We discussed different possible approaches and the use of contour or descriptive lines. We allowed for the use of colour and word descriptions and the honing of all the senses to enhance the experience.

Each participant was given a handout with some word prompts.

Here are a few photos from the morning. 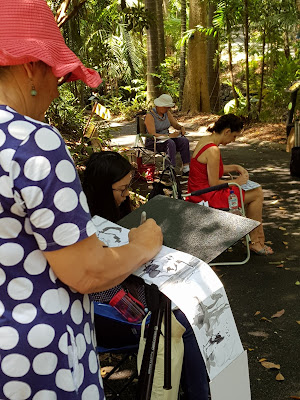 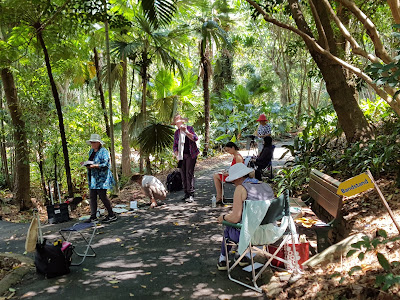 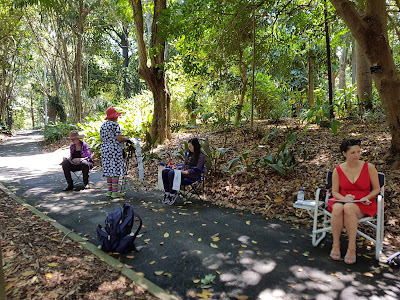 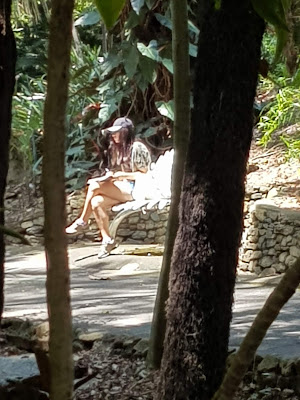 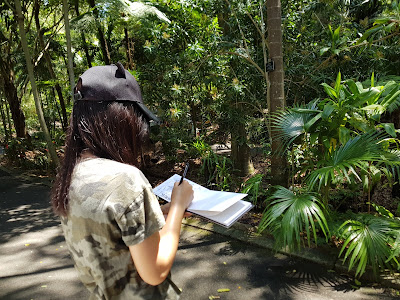 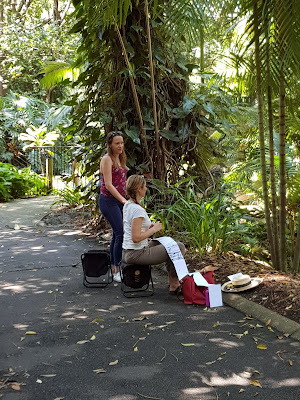 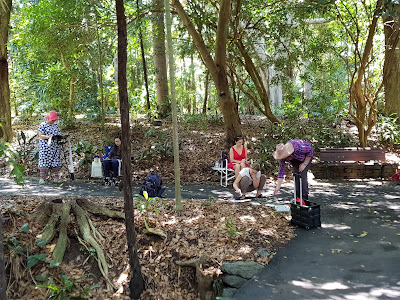 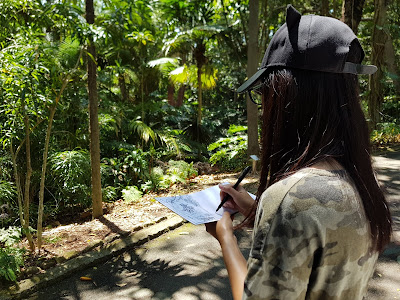 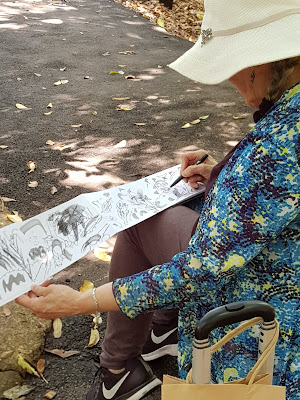 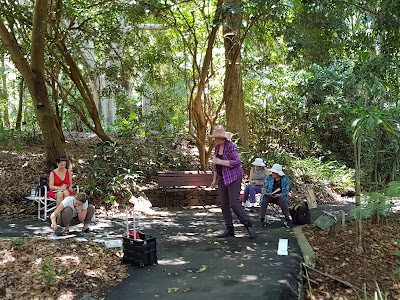 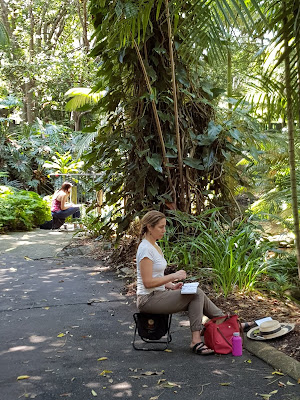 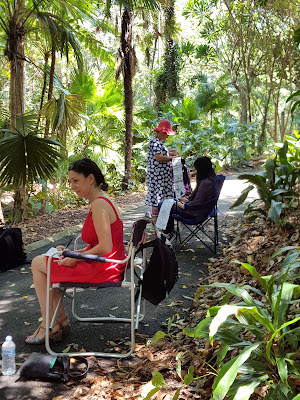 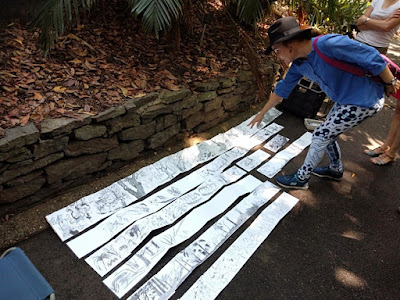 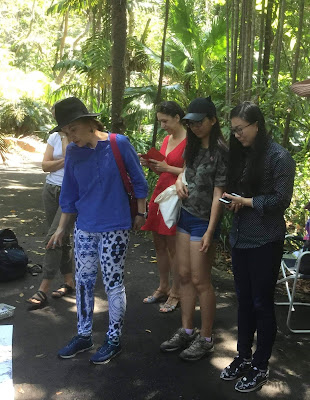 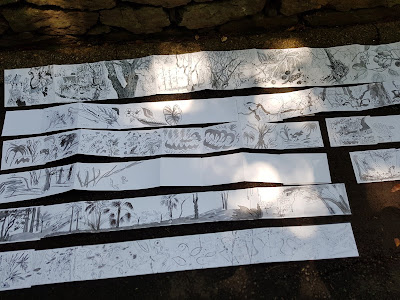 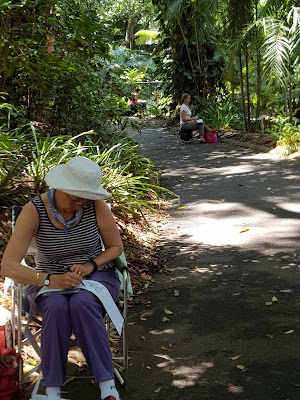 My monthly workshops in the Gardens are going swimmingly with no shortage of participants. The full complement of 12 has been reached and surpassed every time, with a few on the waiting list managing to sneak in also.

The topic for September was "Tips on Composition" and there were many practicing artists or sketchers who attended. 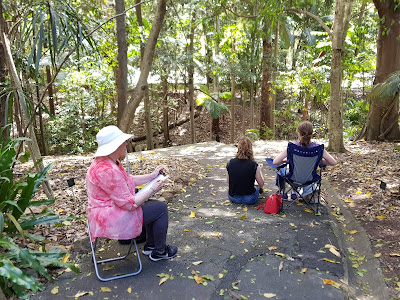 The outdoor component was held in the Aboriginal Trail area just off the main road. Plenty of shade in this spot. 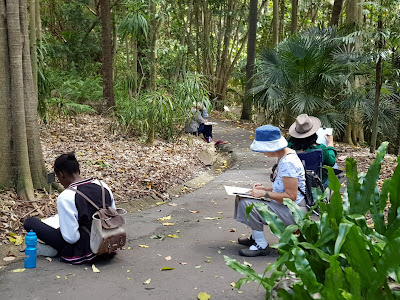 It was quite a complicated lesson but putting it into practice outdoors consolidated the concepts. 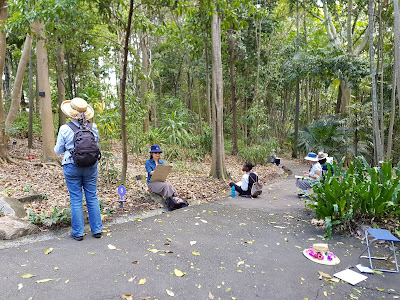 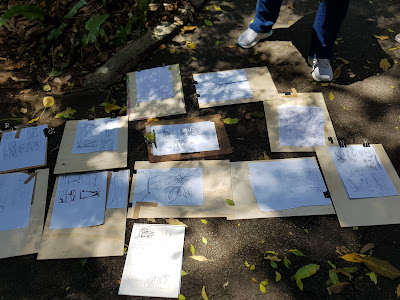 Not a great photo of the sketchbook throw-down due to the shadows but it just started to rain slightly so people were scurrying for cover. 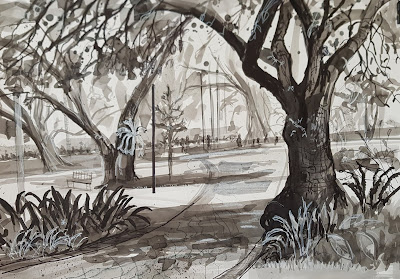 The drawing above was done in the City Botanic Gardens as I do try to spend some time each month there also. The trees there are older and thus much more established. You can see distant vistas also through the different grouping of plants. 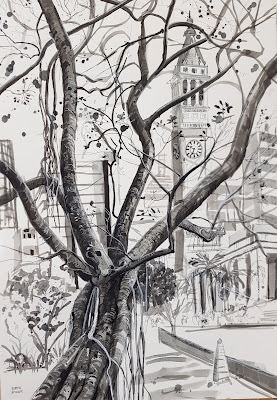 I just couldn't go past this tortured specimen of a Fig tree just up from City Hall. It's not actually in the Gardens of course but the drawing is certainly inspired by others I have been working on that are.

Here I am working on my very long concertina sketchbook, the results of which will be revealed shortly. 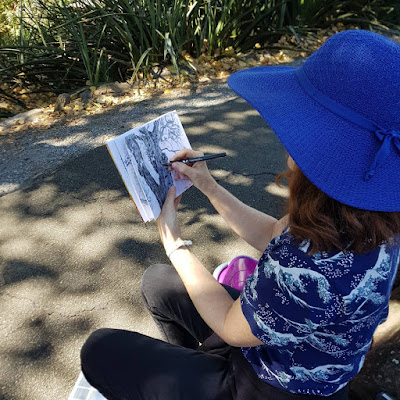 Every part of the book has been drawn on location in the gardens. 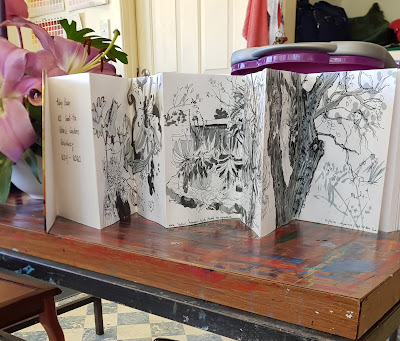 A studio shot of a small part of the book. 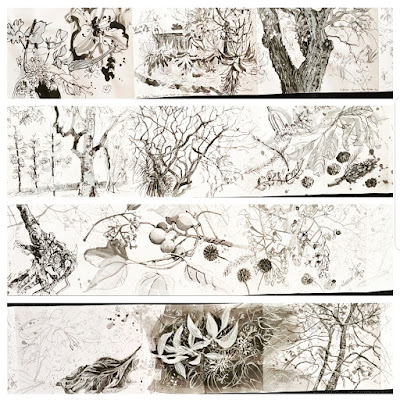 Above shows several of the pages collaged into one photo.

I was sitting sketching in the Cactus House last Thursday with a group of sketching friends and a small group of school children walked past. They were so intrigued to see drawing being done out in the open air and as usual they stopped to watch for a while. They wanted to work out what I was looking at exactly and then follow the drawing lines I had made in response. And then... one little girl actually said to me

"I wish I was you!" and with that she walked off with the rest of the class. It made more than just my day but rather my whole week! It made me feel that what I was doing was so worthwhile, not just the artwork itself but the process of doing it where people could watch me, particularly children.


This was the actual drawing done just with various dilutions of ink and several pens. Below are some other photos of the day.


I have gone back to drawing on large sheets again and work on them over several sessions. They do not depict an actual scene but rather several plants from a particular area.


The late August weather was still a little unpredictable and we did get a few showers so working under the cover of the cactus house roof suited us perfectly.


We had our largest group so far of eleven artists on this particular morning.


I am still managing to get to the Gardens on most days. I feel that even though six months have passed since I started, I am still happy drawing on location. I had thought that by September I would have started some larger studio paintings but I am finding that I have to actually be in the Gardens to actually do anything. I can't work from photos right now and am not keen on working from cut specimens either. I know most botanical artists work this way and I have done some detailed drawings back in the studio of detritus from the forest floor, but I am seem to need the ambiance of being near live plants to respond in an appropriate way.

After the creative burst of the Collage Workshop preparation I enjoyed doing some small detailed tree drawings on paper prepared with a swish of acrylic.

I decided I would do ten in a little series but ended up doing many more.


The drawing above was done in the City Botanic Gardens on a very cold morning. Bunya Pine tree.


This palm tree is from Brazil and it did have quite a lean on it toward the light. I included the tap just to left of it to help locate it and also to indicate the strong angle at which it is growing.

I really couldn't go past this impressive succulent which is in the Arid Area not far from the cafeteria. I have drawn it from several angles over the years.


These Mexican ponytail trees have always intrigued me. I love their weird sculptural forms.


It is not always possible to get a shot of the drawing and the tree due to shadows.


The photo above shows the Ponytail tree drawing in progress.


So much variety to capture in tree morphology. When deciding which tree to draw on a particular day I usually just try to find something different from what I did the day before. I don't have a very scientific decision-making process. Another factor is shade. I have learned the hard way to always choose a spot that will stay in the shade over several hours.


On Japanese Cultural Day on August 18th, I thought I should choose something with a Japanese theme so I headed to the Bonsai House where I found this beautiful specimen of Swamp Cypress.

I went back there for the next few days also. Several bonsai experts were volunteering with the gardeners and I learned a few tips about maintaining my own bonsai at home.


The bonsai house attracts a large amount of visitors and listening in to the conversations around me, most of them are very knowledgeable about the specimens and the process.


One of the lovely gardeners stopped by and took a series of photos of me working.


And finally tree number ten in this little mini series.


This final drawing depicts my favourite Moreton Bay Fig Tree in bonsai form of tree over rock. I just can't get enough of these trees in any form!