I am still continuing to explore the possibilities of the medium of pastel. The colours can become so luminous with the layering effects which makes them ideally suited to the effects of light on the landscape and also clouds.

I am trying something a bit different from my usual subject matter. I drove up to the Glasshouse Mountains as I have always loved those monolithic volcanic rocks towering over the coloured fields. The colours in the landscape were very strong that day reflecting all the rain we have had and the fact that we really are in a semi-tropical area here in Queensland. 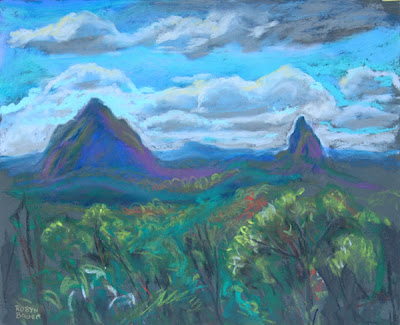 My big secret ingredient here is the paper. I used sandpaper! It is about P400 or P600 in sandpaper language. I love the texture and also the black surface. You have a lot of control over tone as you are consciously working from dark to light instead of the usual white to dark. 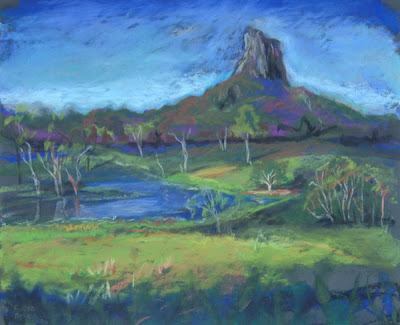 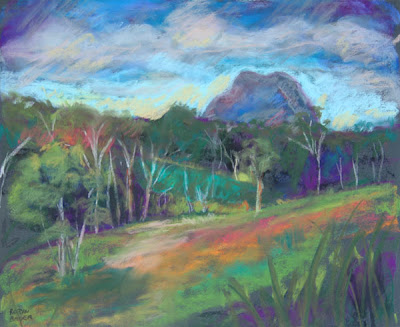 These two are different angles of the Glasshouse Mountains. We drove down every back road to get the best vistas. 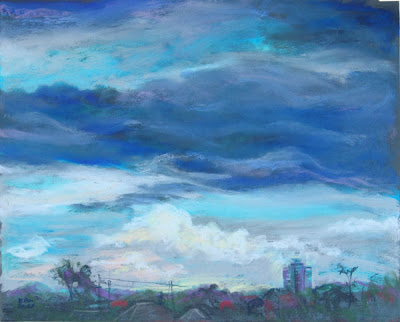 This one is much closer to home, being the view from my back deck. That is Torbrec on the right. It is really just a cloud study with the new medium.

I should stress that these are just experiments and I do intend to do larger works incorporating these landscapes as backgrounds. 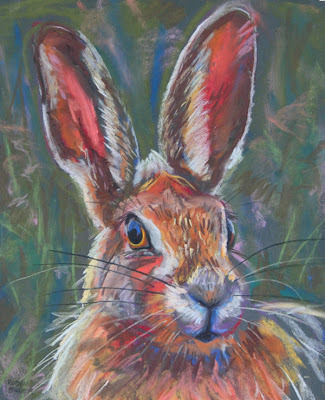 This rabbit is also a shift for me instead of my usual kangaroos. I did him over the Easter weekend which was just a coincidence. He is also source material for some larger ideas.


I love the internet. How amazing for an artist to have such a wealth of historical material to trawl through, particularly from here in Australia where good old master works are few and far between.
And links lead to links lead to links. That is how I have recently discovered the Art Renewal Centre.

If you read through some of my earlier blogs you will find similar sentiments expressed to some of those on the Art Renewal Centre website. Where have they been all my life?

The following quote is lifted from their site


"If you studied art history anytime between 1945 and 1980, you were told that there were great old masters that existed from the early Renaissance to the time of David, Constable and Turner in the early 1800's. Then you were taught about Corot and Courbet and the Pre-Impressionists and then finally the Impressionists themselves who led the way into Modernism. Most of the period from 1850 to 1910 was described as a terrible cesspool of official art where petty academic artists painted inane silly paintings that cared only for technique, that were devoid of emotion and who didn't recognize the genius of the Impressionists. Maybe one paragraph about that long was all you read. Possibly they mentioned the leaders of this rogue's gallery and so they might have said once the names of Meissonier, Bouguereau, Cabanel, Gérôme, Alma-Tadema, Lord Leighton or Burne-Jones, and never showed you any of their works. If they did show anything it was always a bad example. "

It is as if they have been reading my mail! This struck such a chord with me! As soon as I read the opening words I was saying yes, yes, yes, this is totally true of my art history studies! In lectures at Queensland University we were shown images by Gerome, Cabanel, and Bougereau and told they were the "bad guys". I remember thinking. They look pretty clever to me, but of course I never voiced this out loud. One thing I have been saying out loud, very loudly to my family and peers is, -  whenever someone goes on about Impressionism etc I say THAT'S NOT ALL THERE IS! Another thing people have heard me say ad nauseum is - "The pendulum has swung too far away from skills."
And I will die of boredom if I have to walk into another darkened room with an "art" video showing. I would far, far, rather watch paint dry...

For anyone interested in art I recommend reading some stuff on the website above and making up your own mind. Some of the articles are quite brave and provocative but there is a lot of bandwagon jumping among the posted letters. Meanwhile I am continuing with my private study year of anatomy, life drawing, portraiture and my secret project.

Here are a few drawings from the past week. 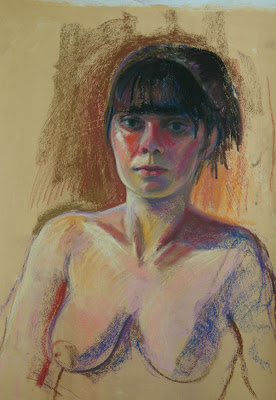 This was about two hours of work. I just concentrated on the face which was mostly in shadow from where I was standing. She does look a bit bored and droopy and she was poor girl. I am happy that I have captured something of that feeling. Pastel on prepared paper. 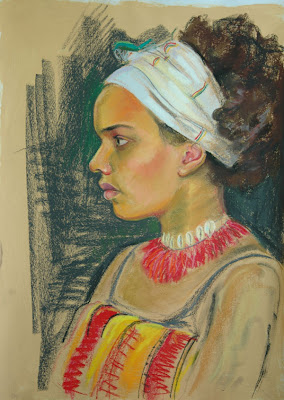 This beautiful model is one I have drawn once before. The earlier image is on my last blog post. This time I had a full profile view. Again about two and a half hours. No time to finish the traditional African costume she is wearing or her arm. 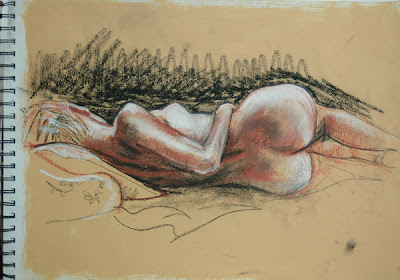 This is a sketchbook study from one of the life drawing sessions. I am still going to about three per week. It is done in black, white and sanguine conte in about 20 minutes on prepared paper.