When you ask people what they actually like about the Ekka, the answer is usually "the cows" and then "the cakes" so I thought that today I'd better get a spot in front of the cake cabinet before it got too crowded. 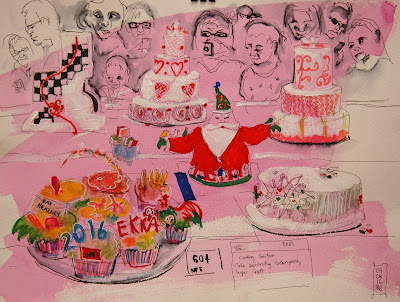 As I sat doing this, I was recognised by a few Dalby people (due no doubt to me mentioning my origins on the ABC story) which was lovely.

Apparently you are not allowed to photograph the cakes due to design copyright but as you can see I caught several people doing so. Yet another example where the sketcher is accepted where the camera is not.

I should mention at this point that there is a large behind-the-scenes room for the use of stewards, that I have been given access to for tea/coffee and having a breather. I was chatting to one of the stewards about what people associated most with the Ekka. I mentioned the wood-chopping and how I intended to include that.

Steward; "Did you know we have Lumberjacks from Canada here this year"?

Me;  "Lumberjacks from Canada"?

Steward;  "Would you be interested in sketching Lumberjacks from Canada? The're just here for the Ekka."

Me; "Yes I think Lumberjacks from Canada are definitely something that as Artist in Residence I should give some attention to..." 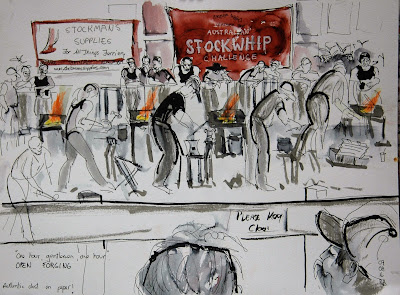 I headed to a tent where I found Stockmen (not Lumberjacks) but thought them well worth drawing. They moved so fast it was very difficult to capture them but this gives a general impression, particularly of the bright orange flame each was using to forge a horseshoe. I headed towards the wood-chopping arena and found the Jack and Jill cross saw competition in progress. This view gave me an opportunity to sketch the crowd in the opposite grandstand. This drawing covers several events including the tree climbing event. Again everything was fast moving. (no lumberjacks here) 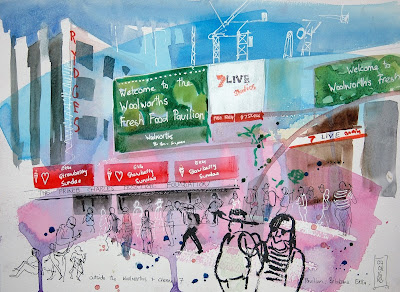 By this stage of the day I had done a fair bit of fine pen work and felt like splashing some paint around. Crossing Gregory Terrace however I saw these white cranes against the blue sky and had to stop to record that. There was quite a queue for the Strawberry Sundae. 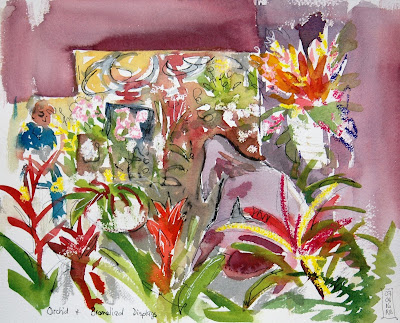 I finally decided that to really splash some paint I would have to head to the Garden Clubs and I did this side view through the bromeliads to the orchids.

Lumberjacks will have to wait!