Artist in Residence at the Ekka - Day 5 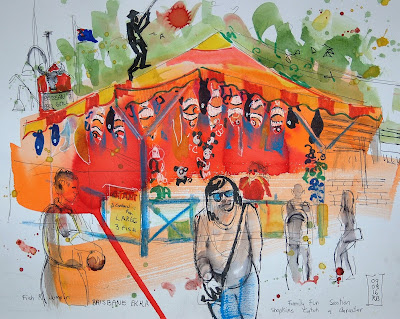 Today I am starting with my last image first as it is the most colourful so far and shows how my confidence to work quickly is growing as I warm to my subject matter. I had a grassy spot to sit and view this "Fishing Tent" in the Family Fun area. That is a black cut out angler on the roof although he looks a bit more sinister than a fisherman. 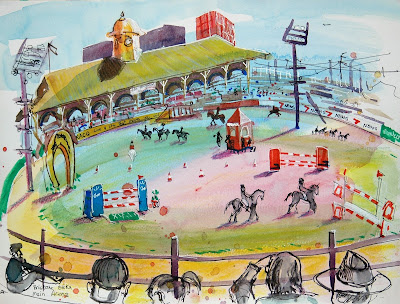 My first picture of the morning was this view of the main arena including the iconic clock tower.  There was some horse action, a bit of dressage and later some trotting. I have tried to indicate both. I was working on this one when I did the Channel 9 interview. For the people in the far grandstand I did draw actual people, in a blind contour drawing kind of way, looking more at the people than my paper. 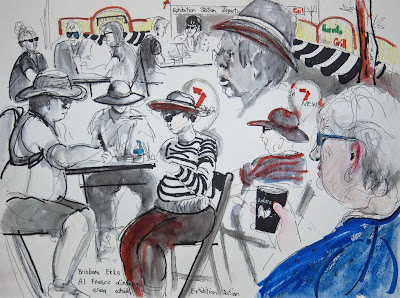 This image of people grew in an organic way. I just grabbed whoever I could see at different stages in the Al Fresco area outside the Fine Arts Pavilion. I do these people sketches in my downtime, whenever I am having a coffee myself. Exhibition Station is in the background. 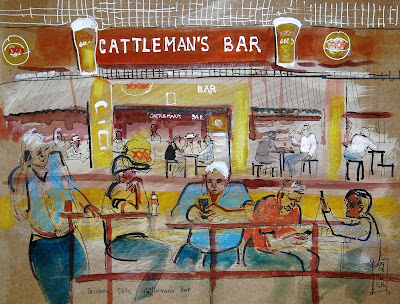 Finally made it to the Cattleman's Bar and yes I did have drink and a chat, and patrons were very interested in what I was doing. It is no exaggeration that these people were all on their phones. I used a different paper for this one, a brown craft paper with a swish of shellac and some pastel primer. I have all sorts of papers in my folder all cut to a standard size. 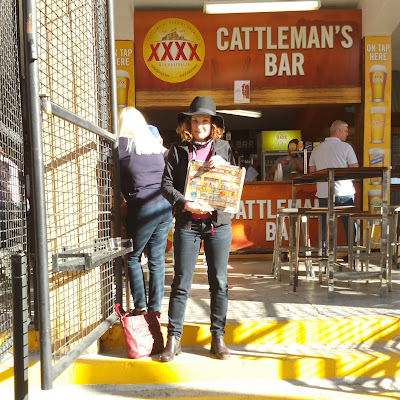 And here is the evidence! 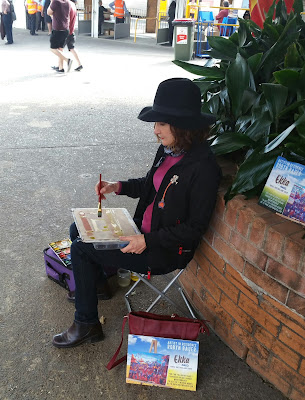 This is me working on the sketch of the Cattleman's Bar, sitting directly opposite.

Still haven't made it to the Lumberjacks from Canada!