There was one Pavilion I hadn't sketched inside (although I had done the exterior) and that was the Woolworth's Food Area. I made a beeline there first thing this morning and had a great view of all the Providores before there were too many people. 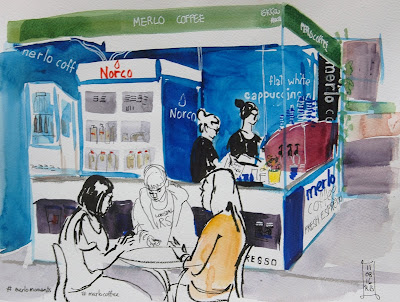 I got two done in this area and was able to sit comfortably at a table and paint in two directions. I enjoyed a Merlo coffee while watching these energetic and efficient baristas at work. They were delighted when I showed it to them. #merlomoments 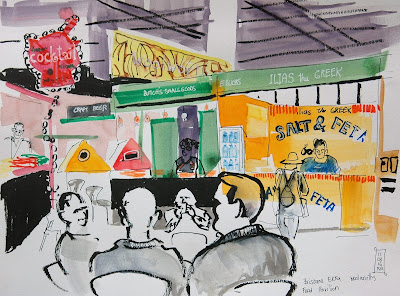 The second one done in this spot was of Ilias the Greek and Butch's Smallgoods.  Just enough people around to get social atmosphere. The guys in the foreground were all wearing some uniform shirts having coffee before jumping up and disappearing. I knew that would happen so just blocked them in. Temporary patrons who have somewhere else to be asap! 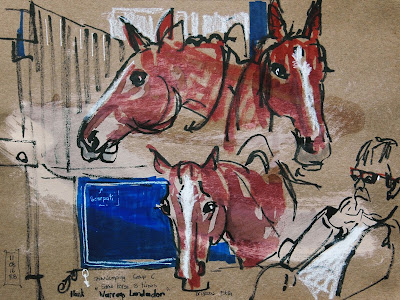 I keep checking my Ekka map to see if there is any spot I have overlooked and I realised that I hadn't gone the whole length of the horse stable area. I can't stay away from the animals for long it seems.
This horse is called Warrego Landadon aka Hank and I swear he was motionless when I chose him to sketch but as soon as I started he became very curious and moved his head every which way. Consequently I have three different views of him. After his modelling session he then went off to compete in the Showjumping. 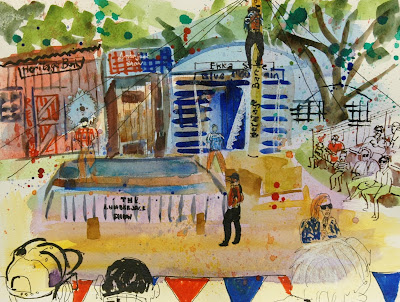 I finally made it to the Lumberjacks from Canada! It was a very funny show with a couple of death defying acts climbing the high pole. I decided to try and paint the whole setting including the audience. The lumberjacks were too far away to get much real action or detail. At least I finally found them! 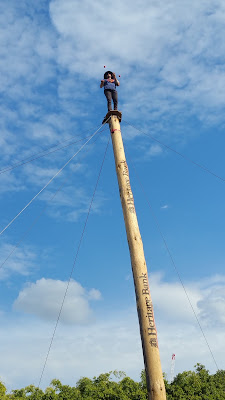 And finally another onlooker took this photo of me at work below. I was in the back row of the grandstand, as high as I could get. 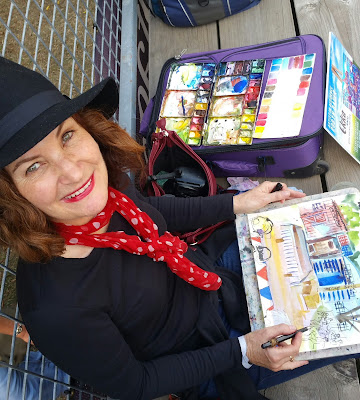 Another productive day. The question I get asked most often is what am going to do with all the drawings and paintings. Well I will do some larger paintings on canvas when I get back into the studio after the Ekka is finished and will show them at some stage.
If you want to keep posted just check in here occasionally!