The Movie "Mr. Turner" and a defence of Ruskin, from a painter's viewpoint.

This is a great movie. I have now seen it twice on the big screen and I enjoyed it even more the second time.
The first time it took me a while to get into the slow pace of the random snippets from Turner's life which set the scene and introduced the characters and also the gruff, grunting incarnation of the painter by actor Timothy Spall.
The second time, knowing what to expect with regard to these things, I was able to concentrate more on the subject matter set out before me from a painter's point of view.

The opening scene presents a Dutch landscape in soft painterly light and after a few minutes it reveals the characteristic rotund top-hatted silhouette of Joseph Mallord William Turner (1775- 1851) against the flat landscape. The device of recreating painterly effects or actual paintings is not overused in the film, in fact we have to wait until towards the end to marvel at a recreation of "The Fighting Temeraire tugged to her last berth to be broken up" while Turner lounges in a boat as it chugs past. 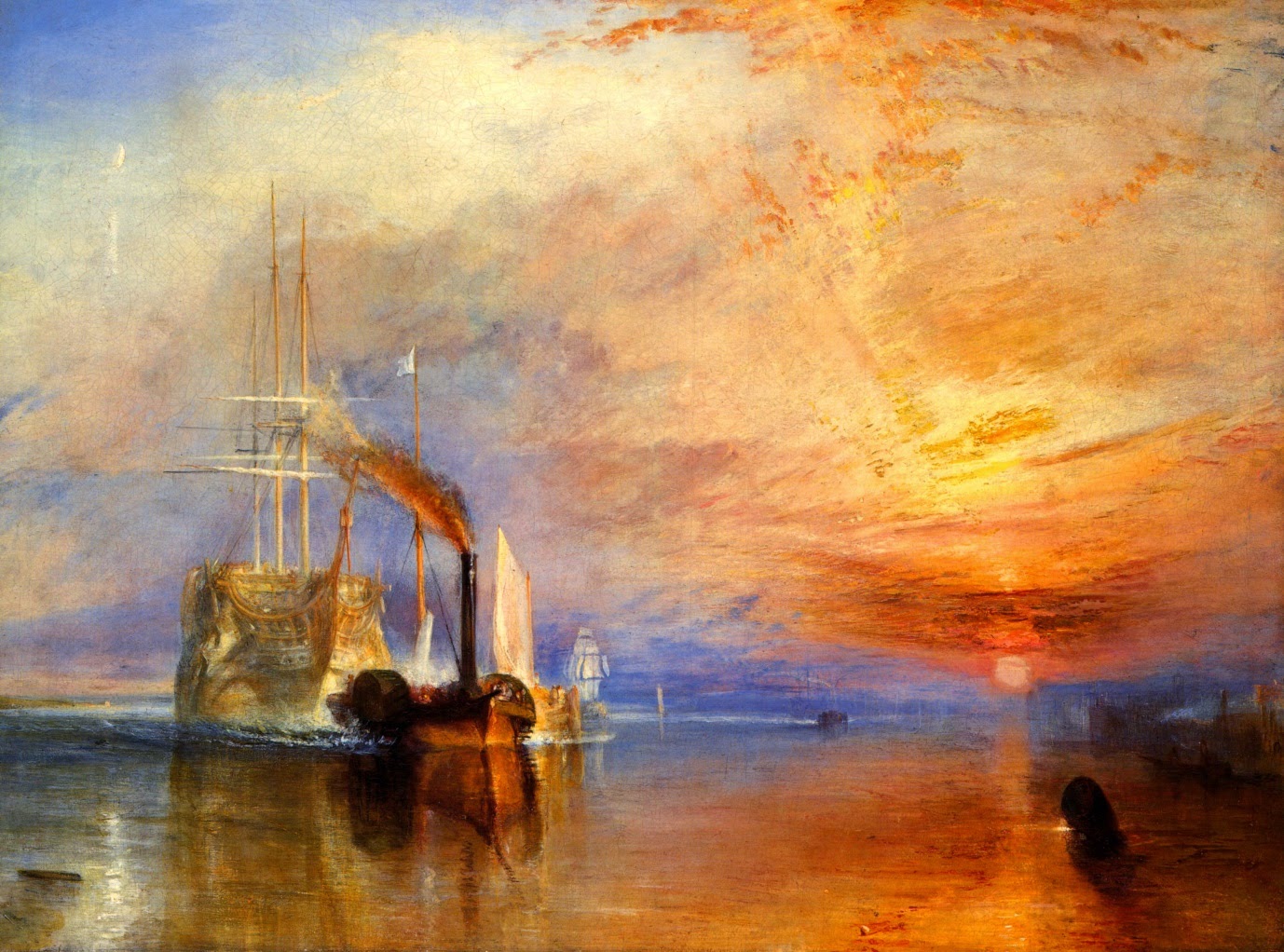 What interests me most about this film are, naturally enough, all the art references. Apparently director Mike Leigh had an art research assistant working for two years on the background details. Many of the scenes in the film can be traced to anecdotal evidence or at least rumours about Turner in his day.(See my earlier blog about a Turner monograph) - The darkened room before the surprise of the bright viewing chamber, the peep-hole to spy on his visitors' reactions, the lashing of Turner to a mast during a snowstorm. These all make great viewing.

An early scene at a country estate of one of Turner's patrons shows the artist attempting to sing Purcell's Dido's Lament while an accomplished but dowdy young woman plays the harpsichord accompaniment. This scene takes place in front of gorgeous and sumptuous old master paintings by Lely and Van Dyck, magnificent Charles 1 on horseback prominent amongst them. I certainly played spot-the-old-master on my second viewing and and spied some Henry VIII legs but not the whole painting. The intricate wooden carvings around this room would have to be Grinling Gibbons. Turner's paintings are also hanging in this room amongst this illustrious company but the poignant singing scene serves to suggest that he belongs yet doesn't or perhaps the work belongs but the man doesn't or at least not yet... As he croaks the words "Remember me....remember me", I felt this was Turner's raison d'etre throughout his life. It becomes especially moving at the end of the film.

Other favourite scenes included those set at the Royal Academy exhibitions. It must be noted that this was really the only way an artist's work could be seen by the public. The private gallery scene as we know it today did not exist in those days. The personages at the academy included Leslie, Stoddard, Stanfield, Pittersgill and of course John Constable. (See an earlier blog of mine about him) This rich scene of  "varnishing day" was a triumph, something rarely seen in cinema, and again so much fun to spot-the-painting.

I did enjoy the fleshing out in a dramatic manner, of the reality of the artists' concerns at such events, - the rivalries, the worries about placement and reactions of the viewers. Artists today still have such concerns. What I do take issue with is the denigrating nature of the caricatures these figures were reduced to for the sake of the quick laugh. The depictions of Constable, Haydon and later Ruskin were just too mean and thus misleading in my opinion. The scene with Constable is well documented as there were so many witnesses and apparently he did say "He has fired a gun" but why make Constable out to be such an idiot? Turner was made a academician at a young age while Constable had to wait many years for the honour. 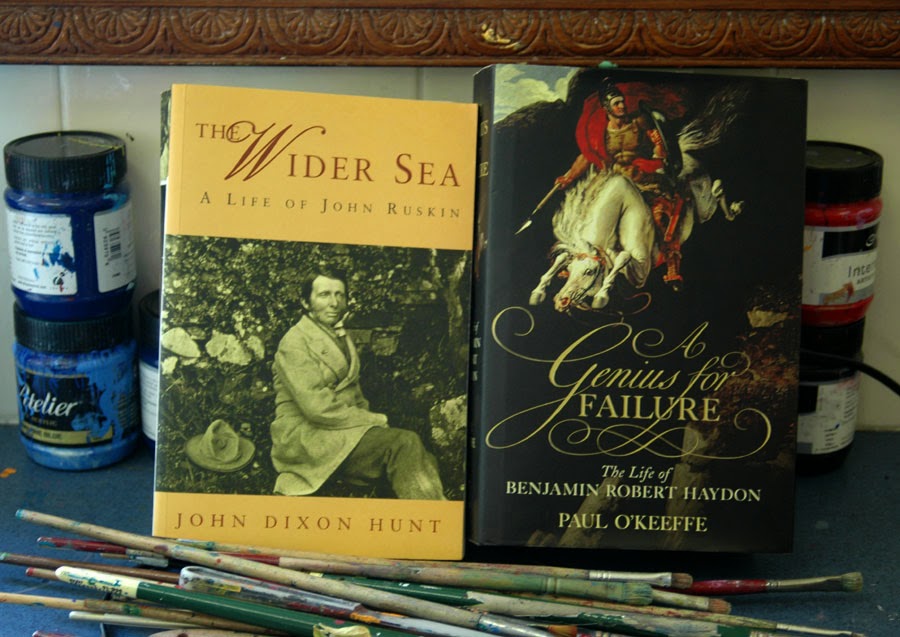 My life has been spent reading the life stories of these real life artists and critics so I guess I am not the average Mr Turner-movie-goer. Is this bias?  The image above shows two books from my shelves about Ruskin and Haydon respectively. So naturally enough I have a bit of prior background about these two historical figures. Haydon was an interesting artist. Instead of relying on the academy to show his work he hired large premises to put on his own exhibitions of his very large history pieces. The book "A Genius for Failure" by Paul O'Keefe (seen above), outlines some of the tragedies of his life, but he was undoubtedly devoted to his art, refused to simply paint portraits for money and famously fell out with the Royal Academy as a result of his independence of them. His scenes in the film involve money borrowing but no hint about why he needs it.

It was the portrayal of John Ruskin (1819- 1900) that particularly worried me. In the film we meet a very young Ruskin in the company of his father visiting Turner's gallery to buy a painting. (He would have been 45 years younger than Turner) The Ruskin in the film played by Joshua Maguire is given a typically upper-class "www  for rrr" type lisp that makes of him a figure of fun. Turner makes a big show of getting the maid to remove bluebottle flies from the overhead canopy which further serves to belittle Ruskin who was in the middle of a monologue about Turner's use of opaque white. (It is a good point about the opaque white!) I find it difficult to believe that Turner would have been so dismissive of his greatest champion. In 1843 Ruskin wrote "Modern Painters" which is a defence of Turner's work and "truth to nature" compared to the work of Claude Lorraine which Ruskin describes as insipid.

The drawing room scene in which Ruskin shocks both his parents and the other artists present by elevating Turner above Claude really grated on me. Ruskin may indeed have had a doting mother, and may have ruffled feathers with his outspoken opinions but there is no way Turner himself would have made fun of him to that extent. (With his question about the steak and kidney pie).

John Ruskin was a genius. His books and art writing are legendary. After Turner he championed the Pre- Raphaelite brotherhood which is alluded to visually at the end of the film. 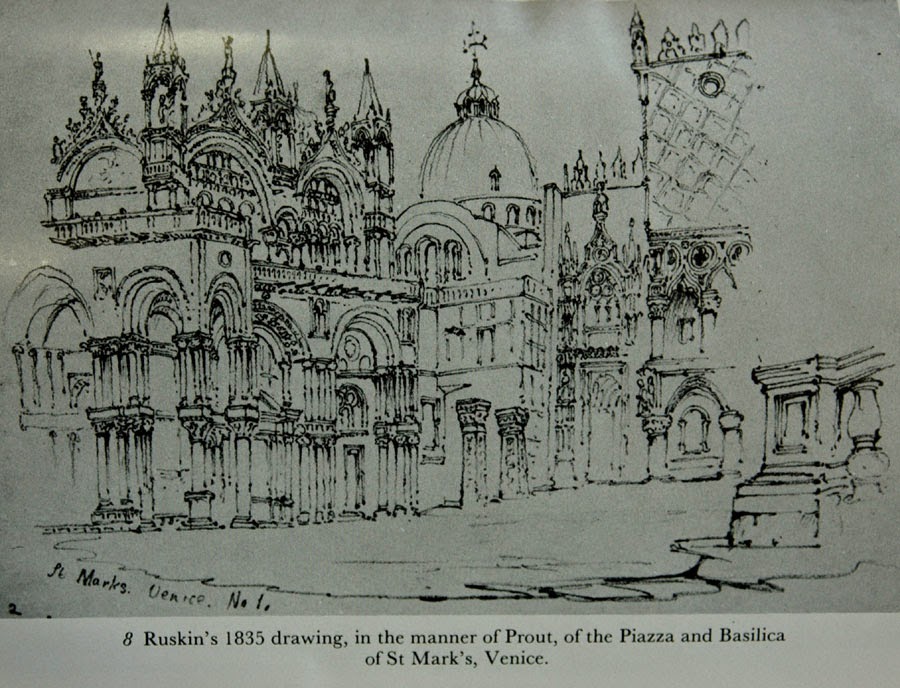 Ruskin was also an accomplished artist in his own right as these line drawings show.  His famously unconsummated marriage to Effie is also alluded to in a dinner-table scene late in the film. 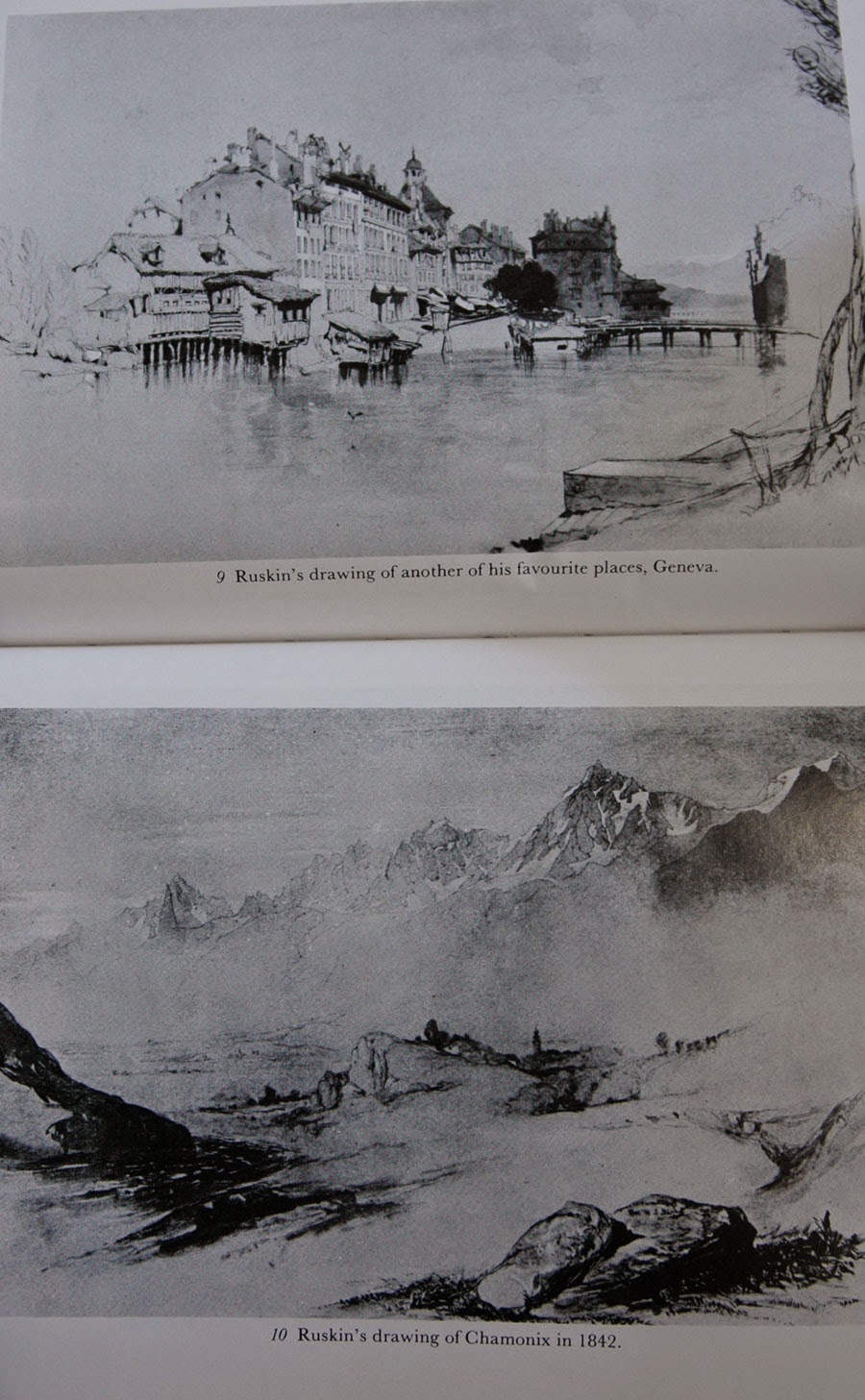 These drawings above hopefully help to strengthen my point about John Ruskin being a very accomplished figure.

Another point about the film which is of interest to artists is the introduction of photography about which Turner mumbles "I fear I too am finished". And about the use of colour being at that time a mystery to photographers "And long may it remain so"!

Turner never painted en plein air although he spent a lot of time out of doors and his approach inspired the French Impressionists to later do so. Instead he carried a sketchbook that could fit in his pocket and wrote colour notes to himself on his sketches.

My final point is that anything that brings the noble art of painting to a wider audience is to be lauded. So well done Mike Leigh, Timothy Spall and the rest.

We are still painting Mr Turner, photography,  critics and science notwithstanding.