Drawbridge is Up / George Lambert

I am working in the studio and the drawbridge is up. No visitors to the gallery as it is closed for January. Space and time to myself to work and contemplate work is truly bliss. My only outings are to get art materials, visit the library and walk the dog.

Today however I did a flying visit to the Queensland Art Gallery (still in my painting clothes) to have a closer look at Australian artist George Lambert's large canvas of "The Mother". 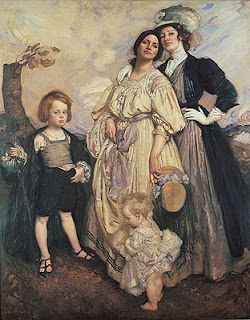 I had been reading two books about him lately. One is
Art and Artifice  George Lambert 1873-1930    by Anne Gray and the other I found in the library is actually an exhibition catalogue also by Gray called George.W.Lambert -Retrospective- Heroes and Icons  from the National Gallery of Australia.
What I have always appreciated about Lambert is that he was an outstanding draughtsman and a magnificent technician. A kind of Australian Sargent.

I am very interested in learning more about the working methods of artists who are trying to reconcile old master painting and contemporary life. I see the history of painting as a continuing tradition and there are a number of artists such Lambert whose work was informed and influenced by Velásquez and Van Dyke but existed in a more modern era. He certainly got his mastery of tonal qualities from them.

Lambert was very cosmopolitan and apparently had a flamboyant personality and a personal magnetism which are of course valuable assets for a society portrait painter. He also knew about modern movements and was very supportive to younger artists working in those styles but he stuck to his guns and painted in a more traditional manner. 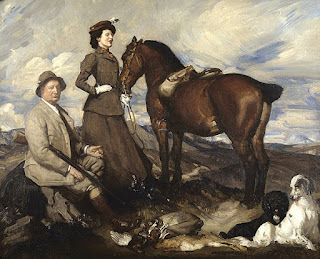 Lambert assimilated the works from the past. He often asked his sitters to adopt poses from the archive of art. He arranged some of his compositions also based on a knowledge of old masters. Some of them are very clever and witty if you know the originals. A Lambert looks like a Lambert though and I think this is because of the strong sculptural quality he achieves. He was also brave and took risks.

This quote from Ron Radford sums this up.
"...there is something immediate and theatrical about many of his bravado portraits. Yet his art also has quirkiness and tough edges that save it from being predictably slick like so many grand Edwardian portraits,whose appeal was short lived."

There is always an element of exuberant display in Lambert which is very seductive. There is nothing tentative, and that kind of confidence is appealing to the viewer.

There is a self portrait by Lambert in the National Portrait Gallery in London and he was also commissioned to paint King Edward VII.

Two other things I want to mention about Lambert are his authoritative brushwork (like Sargent) and his formalist aesthetic. 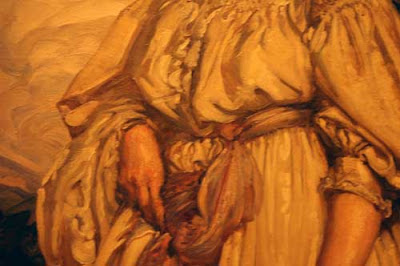 I took this close up in front of The Mother" this morning. Thick light areas, quite loosely applied, very sculptural folds. 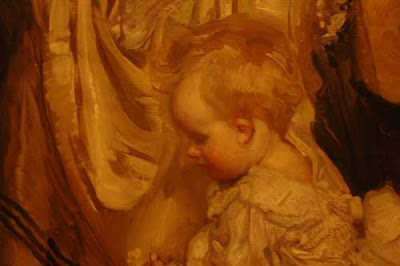 I just love this delicate baby head, so sensitive, closely observed and painted with tenderness, but not sentimental  Which brings me to the point about formal elements. In his day Lambert was criticised for a lack of emotion in his work. BUT this was his aim. He advised young landscape painters that there was always perfect design in nature and that they should reduce it to definite FORMS. He denounced the sentimental.

I wish there were more such works I could see in the flesh here in Brisbane.