About a week ago I was fortunate enough to attend a workshop by Australian artist Robert Hannaford. I have long admired his portrait work particularly his self portraits from unusual angles. I am certainly not alone in admiring his work as he one of the few artists who are loved by both artists and by the general public as his numerous "Peoples' Choice" awards gives testament. 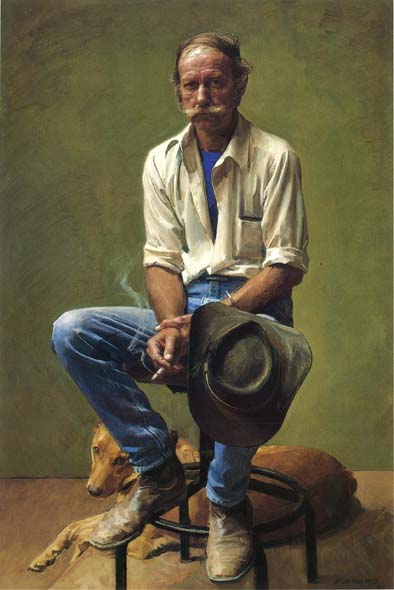 This is Hannaford's amazing portrait "Bill" which won the 1990 Doug Moran Portrait Prize. I will return to it later but first some details about the workshop.

The class was for two days and Hannaford began with a brief overview of his thoughts and methods and a demonstration piece which he continued to work on over the two days. I took brief notes which I will reproduce here.

* Art is an "act of discovery"
* Don't have a plan
* Importance of a viewfinder to try different compositions and then the "That's the one I want" moment. As most of us didn't have this essential piece of equipment he proceed to make several out of paper for us.
* SHAPE  COLOUR  TONE
* Abstract pattern / Abstract shapes of the masses, and Light/Dark
* Objectivity
* Squint to see tone and open eyes (till they blur) to see colour,  Shift between these two.
* Don't fiddle
* Don't rush in
* Using viewfinder try vertical or horizontal composition/ different sizes of head/ inclusion of body etc.
* There is a psychological horizon in a portrait ( eye height if standing in front of it)
* Re-see every day, don't follow your drawing from the day before or even from the previous sitting before the break.

As far as his method goes, Hannaford started on a white canvas, blocked in using charcoal which he then wiped off just leaving traces. He also started with lots of paint which he wiped back. He did even put in some highlights early on ( not details, details were last) so I guess you could say his approach is an instinctive one.
Filbert brushes
He did a tonal block in, around the head etc.

* Only when you cover the whole canvas can you really see what's going on.

And his main point which he repeated throughout the weekend

He quoted Rembrandt as saying  "Nature is my master" and made the point that all the big leaps in art history have been made when artists returned to nature, i.e. Leonardo, the Impressionists etc. The Impressionists, painting plein air noticed that shadows were blue/purple and not the brown that Rubens painted.

He stressed the importance of composition from the start.

* Always rely on your own vision, not on your painting from yesterday.
* For his commissioned portraits he takes 6 to 7 days with a 3 hour sitting per day.

* Seeing is everything.
* Don't worry about technique, technique will look after  itself. Everything will look after itself.
* Spend 90% of your time looking, 10% painting
* Stand back /use mirror to view your progress.
* Don't copy other artists

He spoke about when he was young, taking his own work to his mentor Ivor Hele. He said Hele never said much he just looked, and Hannaford could then see his own mistakes as he felt he was seeing his own work through Hele's eyes.

Hannaford made an interesting point that we are on the verge of a Renaissance with our eyes.
* You can make unique discoveries.

I asked several questions about the painting of Bill (above) most notably about the dog and did he use a camera to capture the dog. He said he did not. (It is the artist's own dog.) There were over 100 sittings for the painting and the dog was there for about 50 of them. He says while other people train their dogs to fetch sticks,  he trains his dogs to pose. 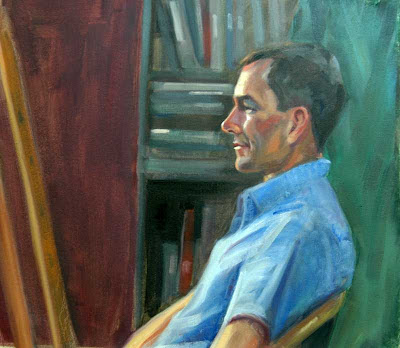 Painting of Brett by Robyn Bauer

This is my effort after the two day sitting. I had a full-on profile which I did not choose as we drew easel positions out of a hat, but but I soon warmed to the possibilities (after using my viewfinder) and deciding to do landscape format which  I would not otherwise have done. The green curtain had been placed behind the sitter and framed the head very well for most of the painters but I ended up finding the book shelf very exciting (surprise surprise). I am sure I have never painted a bookshelf before.

Hannaford was very generous with his information and gave plenty of individual attention. There were some great painters there and some great paintings by the end of the weekend.